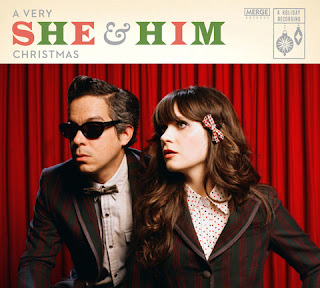 Since it's release {pre-Thanksgiving I might add} I've been listening to She & Him's A Very She & Him Christmas practically non-stop. If you're not familiar with the group,  She & Him are the vintage vocal stylings of Zooey Deschanel {who can forget that we first heard her sing in the movie Elf} and M. Ward who met while working on a song for the soundtrack of The Go-Getter.  Occasionally I do throw some more traditional carols into my Christmas playlist but this album's pretty solid on its own with classics such as Have Yourself a Merry Little Christmas, Silver Bells, Blue Christmas, Rockin' Around the Christmas Tree, and etc.

My favorite from this dynamic duo is Baby, It's Cold Outside. It's a bit different with a faster tempo than is traditional and an interesting role reversal...give it a listen.


P.S. Did you catch the Sing Off Christmas Special? I loved Sara Bareilles and Ben Fold's duet of Baby, It's Cold Outside